Today I got this email from Jim Parker. I hope that a lot of the pilots will stop to fly to the Bahamas now.

The Bahamas government effective July 1, 2013 has instituted new aviation taxes:  $50 in and $50 out for private aircraft and $75 in and $75 out for commercial operators.
This is in addition to the passenger departure tax of $25 which also applies to the crew - the only island nation that applies departure tax to crew members.
So now your day trip to Bimini with three passengers in your C172 begins with a $200 bill before you even begin spending your tourism dollars. The Bahamas reaps millions in tourism dollars from private aviation.  These new taxes will certainly discourage many pilots from visiting the Bahamas and will result in a net loss of revenue for the government.
...
Eingestellt von www.flight-around-the-world.org um 12:00 AM 2 comments:

On the way back to the USA


Today we left Peruibe heading to the USA. We had a nice time here but nothing happened like it should.
The bureaucracy is really the worst we had seen until now. I did the maintenance in the flying club. If I need a part it took forever to get it. Minimum 2 weeks for simple parts. If you have to order parts from the USA a couple month and the prices are 3 times higher than in the US.
No place to refurbish aircrafts. Thanks to all our Brazilian friends.

Hope to meet you soon in the USA.
Eingestellt von www.flight-around-the-world.org um 5:32 PM No comments:

Custom at the Argentinian border is normally not a high time consuming procedure if there would not be uncompetitive people.  A custom woman arrived with an unfriendly face, and with gestures of being the one who knows everything. She started saying that we could not go to the hangar to take out the airplane. After asking half of the airport people, someone accompanied us to the hangar. After 15 minutes we were ready to taxi, but the tower said there was no space on the ramp, a government helicopter with a VIP stood in front of the fuel station.
We waited, but since it took so long, we decided to make first the paper work.
There she stood again in front of us, this horrible woman. She started to tell everybody she met, that is was not her job taking us to customs. She had not the slightest idea what to do, and sent us from one door to the other. She spoke to some other custom guys, telling them that they should check our entire luggage, and even put the dog inside the airplane. Then she said to take the entire luggage she had herself scanned 10 minutes ago, because we might have put something in while she wasn't looking. We took out the entire luggage; fortunately we had not much, and took it to customs. She picked on the officer, he should check our luggage, he looked at her, he looked at us, and said it was ok, no need to check we could take our stuff. She was pissed off, her big authority was on the ground.  She said we had to do first the flight plan, the others said we had to do first customs. Then we were sent to pay the fees, but she argued that we had to go first to stamp the passports.
Each person she met, she told the whole story and how she had to go with us from point A to point B. Normally we do it by our own. We didn’t need an incompetent guide.
At this tiny airport it took us from 9 o'clock in the morning till 2 o'clock in the afternoon to make customs.
The worst person you can meet is someone with no knowledge thinking they know all. On top of that she was unfriendly, picking on others, giving opinions instead of resolving the problem. She was starting to make problems out of things they don't exist.
We were mad, but we had to stay cool. We lost half of the day.

After a 5 minute flight we landed in Foz de Iguaçu , Brazil.

This time it took only two hours to go through custom and do all the ANAC stuff.
Brazil charged us this time more than US$ 250. The average landing fees in Brazil for foreign aircrafts are about US$ 100. Even on small airfields the fee is never lower than US$ 45. For VFR flights.

By the time we were ready to fly to Peruibe, it was 16.00 hours. We decided to sleep there. With the local bus we went to the city and slept in the nearest hotel to the bus station.

This is the reality. It makes no more fun to cross the border. Too much trouble, high fees, highly restricted airspaces.

WHY SHOULD WE CONTINUE OUR FLIGHT WHEN THERE IS NO FUN ANY MORE?

WE PREFER TO FLY IN THE USA.
THE ONLY PARADISE FOR PILOTS IN THE WORLD


The government changed the Visa rules and our plane cannot longer stay in Brazil.
We got one extension but today we will fly the RV to Argentina. We flew to Foz do Iguacu SBFI (Brazil). Shortly after arrival a heavy thunder storm started and we were not able to fly over the border to the 10 miles away SARI the Argentinian part of Foz.
We decided to go with the bus to Argentina and fly the RV tomorrow to Argentina.
As we arrived on the border, the next shock: I was not allowed to enter Brazil. The visa rules changed also for me. What should we do? I’m in Argentina and the aircraft in Brazil? We made an alarm call over facebook, searching for a pilot with an American license and able to fly a RV-7 over the border. Only a 5 minutes flight.
We were lucky. Emile Colcombet will do it.He is an Argentinian airline pilot and lives only 200km away. At first I had to scan all his documents and to apply for a permission, that he is allowed to fly the plane in Brazil. After 3 days he got the permission. One day more and he and Lili could fly the plane to Argentina. Stop!!! At first must be done the paperwork and to pay the R$ 370 / 185 USD departure fee. After the landing the arrival procedures began.
Andres Scherer offered us hangar space at the airport for USD240/month. The following day we drove back with the bus to Peruibe. An 18 hour bus tour. For the flight we need only 2:45 hours. 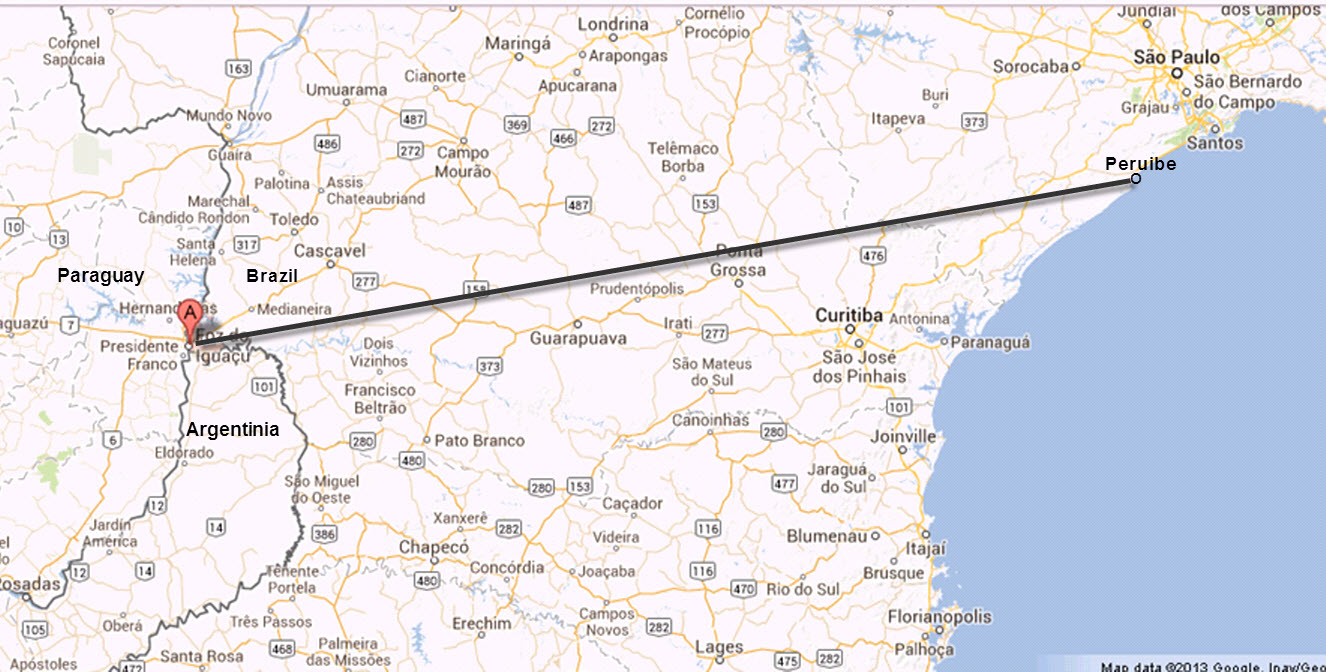 
We visited the Brazilian company FLYER. Brazilians buys about 60% of Vans production. Flyer is the biggest assembler. More than 240 employees produce on 4 production lines more than 2 RV every week. Most of them RV-10. Everything is extremely well organized they have a very high quality standard. 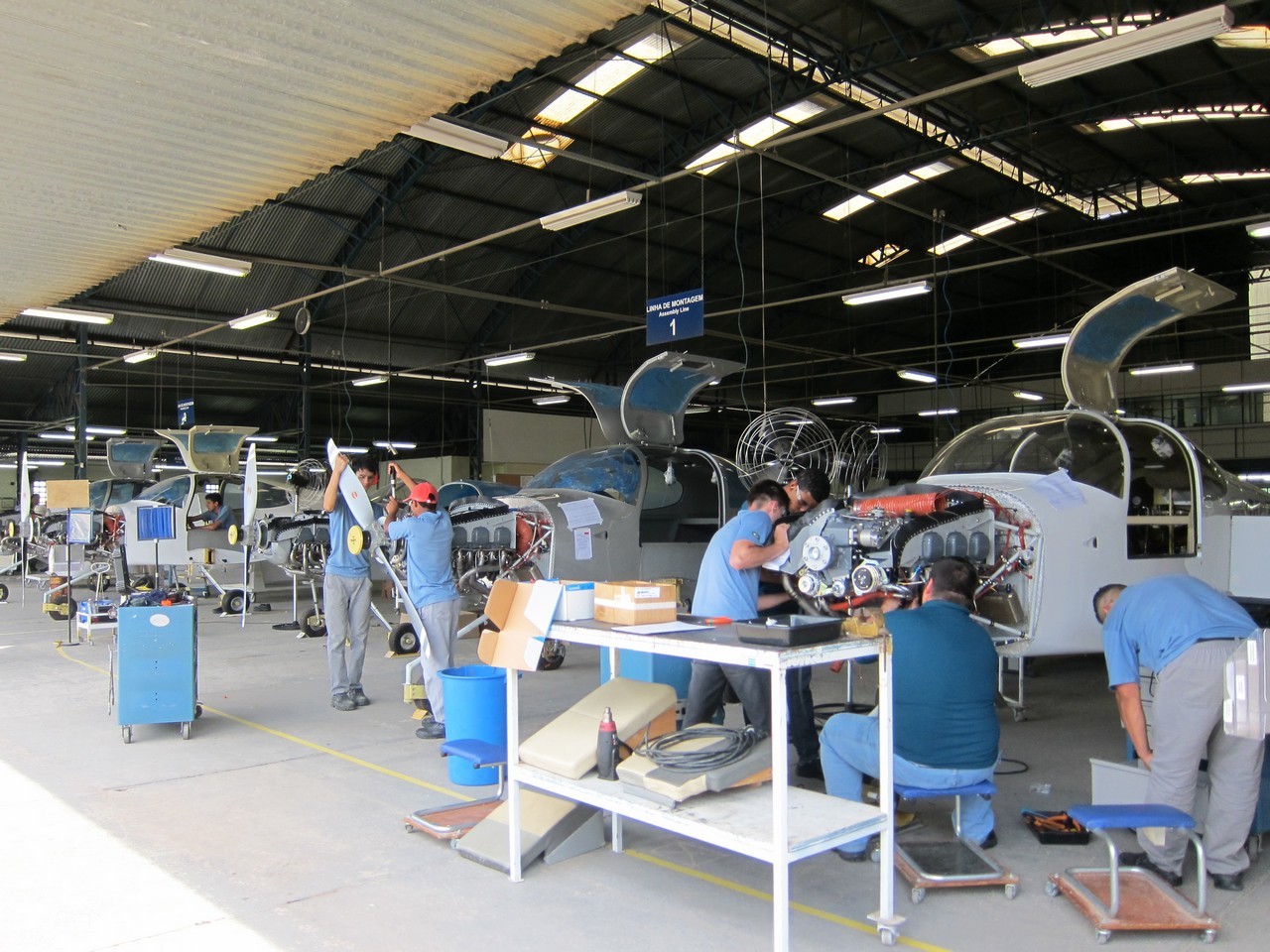 
With one day delay we arrived in Peruibe. Here we will stay for a longer time. Lilis father is already here. We will support him now, since Lilis mother died a couple weeks ago. We hope that we can sell some aircrafts here in Brazil. 60% of Vans production is sold to Brazil. It is a big market here and since the road net is not very well developed, there is a need for a lot of aircrafts in Brazil.
Our goal is to fly back and for to the USA and import some airplanes, restore them here and sell them.
The prices in Brazil are about 30% higher than in the US.
Then we will buy a certified aircraft and continue our trip around the world.
We chose Peruibe because it is very close (100miles) to the economical capital Sao Paulo with its more than 22 million habitants. It is on the beach, it is a small town of only 50.000 people and of course, it has an airport. A nice familiar flying club with 3 RV-10, 5 RV-9, 5 Pelican, 3 Rans Coyote and a couple of GTs and trikes. The grass runway is 600m long. 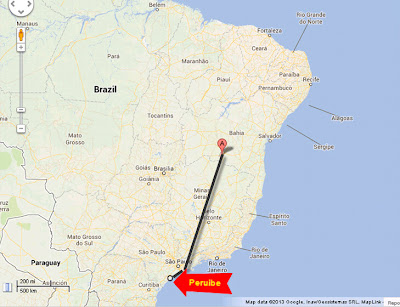 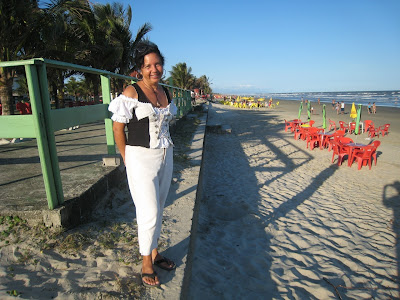